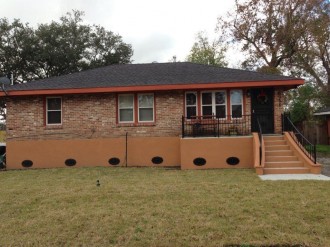 WWLTV David Hammer / Eyewitness News
NEW ORLEANS — The federal housing agency granted Louisiana long-awaited approval for changes to Road Home policies that should help those who encountered contractor fraud, forced mortgage payoffs and other hiccups that prevented them from completing repairs to their Katrina-damaged houses.

WWL-TV reported in May that a year after promising to do so, the state and the federal Department of Housing and Urban Development had not yet released money to help still-struggling homeowners finish their repairs. Shortly after that, the state submitted proposed policy changes – changes that were accepted Wednesday by HUD, according to the state Office of Community Development.

That approval could be a major benefit for some of the people described in another WWL-TV story last week – homeowners who got letters telling them they owed money back to the state.

The Office of Community Develpment said it would start sending letters Aug. 26 to homeowners who are not in compliance with covenants that required them to rebuild and reoccupy their homes.

“In either case, our staff can work with the homeowners to determine if they qualify for any of these additional tools and what their best path to compliance will be,” Forbes added. “The important thing is for the homeowner to touch base with the program staff.”

Action Plan Amendment 58, the first of three amendments accepted by HUD, says that homeowners can have their default balances reduced if they can document losses from contractor fraud, forced mortgage payoffs, vandalism or other subsequent damage to the home or from the installation of contaminated drywall.

Action Plan Amendment 59 allows homeowners to get additional grants to pay the principal balance of construction loans if they submit to monitoring by the program. The state is partnering with lenders and the loans will be available to cover any losses confirmed under Action Plan Amendment 58.

And Action Plan Amendment 60 allows homeowners who owe money back to the state to subtract any of the $30,000 elevation incentive grant that they might have used on home repairs instead of on lifting the house.

This could help people like Charles and Cynthia Heisser of Gentilly, who have been fighting with the state’s Hazard Mitigation Grant Program for years because they used their initial elevation grant to fix their roof and then ran out of money to complete repairs. The Heissers, who are 81 and 79 respectively, have been living in their garage ever since.

“This sounds like really good news for us,” Charles Heisser said. “If they gave us more money to complete the house, I’d definitely be willing to do that. It’s been such a struggle.”

"It turned out better than it was."

Acme Raising was our choice to lift our 3 bedroom home in New Orleans. We have an overhang carport that we were very worried about and asked them to be careful

Fill out the form below to speak with one of our house raising specialists about your project.